As we await the end of March, whereupon we’ll find out who are the founding clubs for the National Dog Agility League, I am conducting NDAL competition here at my training facility. We have a few artifact courses to choose from, some of which have results. Of course I could have designed a new course or game. But I wanted to demonstrate how to use the catalog to record scores against a game that has already been played.

The course we are running this week was originally run a bit over two years ago. There are only six or seven recorded results. But these will be rolled up with new results.

I’ll share with you here the course we are running this week. This is what the page looks like when you open the “Catalog of Courses and Games”. Aside from the course map there is also a link to download the scorekeeping worksheet and another to download existing results.

This is a useful system for clubs that are engaged in league play. Rather than designing new courses, they can select courses that have already been designed and approved for play. Note that the filename indicates the size of the space for which the course was designed: 010413A60x85. This filename indicates that the game was originally played in January of 2013 for a field measuring at a minimum, 60′ by 85′. 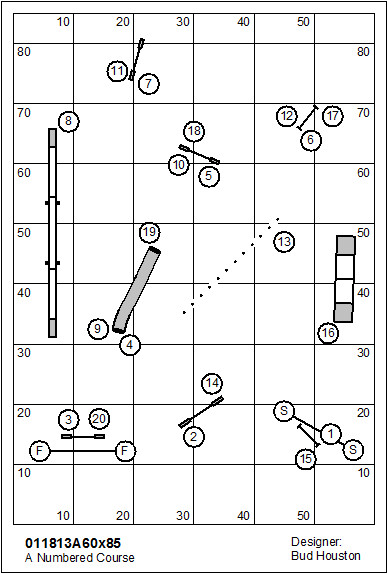 The Catalog of Courses and Games

Each course run or game played under the aegis of the National Dog Agility League shall be recorded in the Catalog of Courses and Games. Any course or game in the Catalog is approved for use and reuse in competition.

If a judge were to make any change in the detail of the Game (eg. changing the scoring basis) this variation would become a new and unique game with no ties or association to the original.

National Dog Agility League (NDAL) competition is intended to be a recreational format for the sport of dog agility.

A Host Club may organize and conduct a competition under the sanction of the NDAL without prior approval so long as:

Questions comments & impassioned speeches to Bud Houston Houston.Bud@gmail.com. The web store is up and running. www.dogagility.org/newstore. You’ll find in the web store The Book of Agility Games, an invaluable reference to clubs engaged in league play.

This is an invitational event to establish the National Dog Agility League. Everyone who participates in March will become a de facto founding member of that league. In many ways we don’t yet know how we will operate. There is a small matter of electing a Board of Governors and establishing the business of the League.

This is a short numbered course which will be scored Time, Plus Faults. 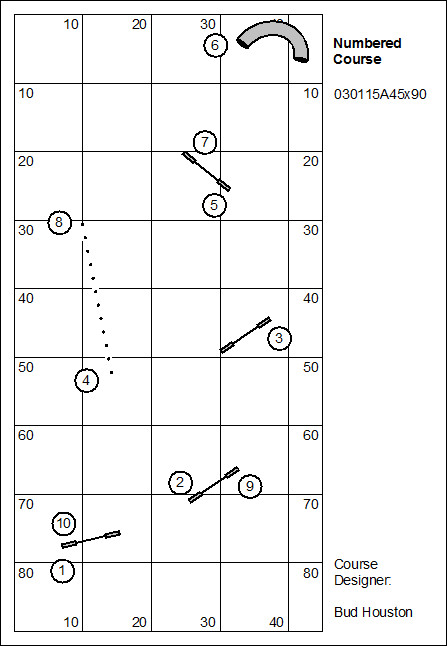 See also: Agility League March Course; which includes a brief discussion of the technical elements of this course.

Catalog of Games and Courses

Click to download the Catalog of Games and Courses: Catalog.  Clubs can set up any course in the Catalog and add their own results to existing results. The Catalog will grow over time.

Questions comments & impassioned speeches to Bud Houston Houston.Bud@gmail.com. The web store is up and running. www.dogagility.org/newstore. You’ll find in the web store The Book of Agility Games, an invaluable reference to clubs engaged in league play.