NDAL leagues typically run a numbered course each month, especially since we’ve introduced the 54×70 Games league. As the others have been deprived of the opportunity to play games more interesting than follow-the-numbers… we are determined this month to play an interesting game in each of our four ongoing leagues.

Following is a preview of the October 2019 games for NDAL league play. October is the first month of the Fall series.

The Fall series of the 54×70 Games league Begins with the game Pole Jacks.

Pole Jacks is like the children’s game of jacks. The weave poles is the bounce of the ball. The dog must first “bounce” (do the weave poles), then pick up one point; then “bounce”, and pick up two points… and so forth until time expires.

The most a dog may score in this game is 7 points! So, if a dog has 7 points he must be directed to the table to stop time, whether or not time remains on the clock.

On any fault the dog must bounce again (do the weave poles) and reattempt the number for the pick-up. Faults include things like:

Jumps are 1 point; tunnels 3, the A-frame 5. The score is the highest number picked up. Points for a partial pick-up convert to a decimal value.

The Fall Series for the 50×70 Fast & Fun league begins with a game called Looper.

The briefing for this game is included on the course map.

The Fall Series for the 60×90 Masters league begins with the game Call, Direct & Send.

Call, Direct & Send is a numbered course that contains three distance challenges that will earn the dog bonus points if performed without fault. Each Bonus is worth 10 points.

Call – Handler leads out and calls the dog over jumps #1 and #2;

Direct – Handler remains on other side of containment as the dog does #6 and #7;

Send – Handler remains behind line while sending the dog for jumps #17 to #19.

The Fall series for the 36×85 Fast & Fun league begins with the game Louganis (Looper variation). 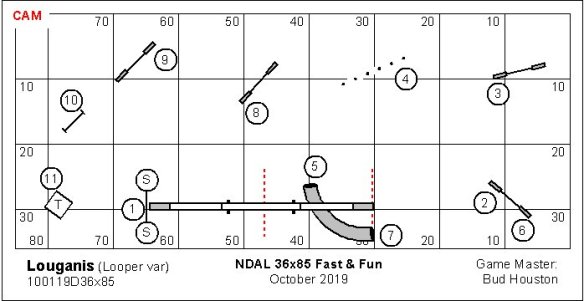 This is a combination of two games: Louganis and Looper.

Time begins when the dog initially steps a foot onto the dogwalk. Time ends at the table after the second running of the numbered sequence.

If a handler returns to the dog to reset a broken stay, the bonus opportunity is lost. In the second attempt at the numbered sequence beginning at the table, the dog will earn a standard fault for jumping off the table only if the handler directs the dog to get back on the table.

An Open Invitation to New Players

New clubs are always welcome to join ongoing play. Download the scorekeeping worksheet below; contact the League Secretary to help with the details at  Houston.Bud@gmail.com.

Existing league franchises will be emailed their scorekeeping worksheets set up with their current rosters.

Questions comments & impassioned speeches to Bud Houston Houston.Bud@gmail.com. Visit our web store: www.dogagility.org/newstore. You’ll find in the web store The Book of Agility Games, a comprehensive reference to all manner of agility games played for competition and fun around the world.