We’re making a modest start with Top Dog in the month of August, 2014. At Queen City Dog Training Club in Cincinnati, Ohio we’ll run a tournament of three challenge courses with no more than 40 dogs.

This has been called the YouTube Invitational. The idea is that we will post results of the tournament in this BLOG, including a link to the YouTube recording of each of those performances. Anybody who sets up the course, anywhere in the world, will be included in those results.

Anyone (club, group or individual) may set up any or all of the Challenge Courses. For results to be recorded for this event the courses must be run in the month of August, 2014, and results must be reported by midnight on August 31, 2014.

If you would like to play, these are important resources for you:

We are honored that our courses for this challenge were designed by Stuart Mah, a judge and competitor with a tremendous depth of knowledge and skills, a beloved old-timer, and a pioneer in the sport of dog agility.

The judge for the event at Queen City on August 5th is Brenda Gilday.  Brenda is a popular judge for Canine Performance Events (CPE) and the Teacup Dogs Agility Association (TDAA). 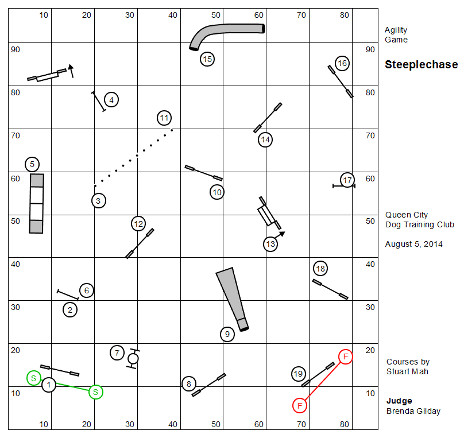 This is a simple numbered course. The scoring basis is: Time, Plus Faults.

Follow the numbers, keep the bars up, hit the paint. And have fun. 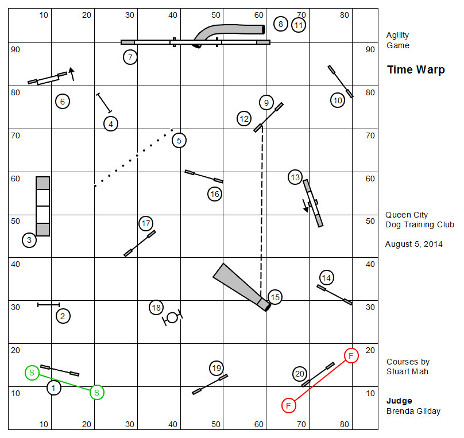 This is a simple game, run like a standard course. The Scoring Basis is Time, Plus Faults, Less Bonus. There is an opportunity on this course to earn a 50 point bonus which is subtracted from the Time, Plus Faults part of your score: If you can stay on the opposite side of the containment line through your dog’s performance of obstacles #12 through #15, then you will earn a 50 point bonus. Note that the bonus is not lost for any faults in the distance challenge.

The course will be used for the league challenge. 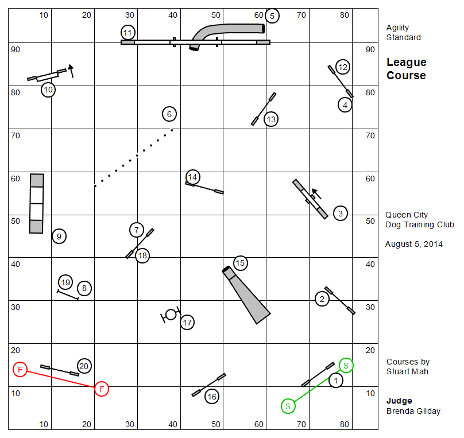 This is a standard course. The scoring basis is Faults, Then Time. Follow the numbers, keep the bars up, and hit the paint. And have fun.

The event at Queen City is intended to be a role model for the conduct of a league competition. A league team represents a community of agility enthusiasts. The team itself is limited to five dogs. The performance scores of these five dogs will be the team score.

As no league committee exits at this point, to establish league rules, to set calendar and objectives, we will recognize only a short set of rules:

That last bullet is an important bit. At Queen City we will be running maybe 40 dogs in the competition. We can not run the 40 dogs and then pick the top five scores to represent the league team. Consequently, the first two games are intended as Qualifying rounds. Each dog’s combined scores from those games will represent their qualifying score. The top five dogs from the Qualifying rounds till be delegated the league team.

That is not to say that this is the only way for a club or group to define their official league team. Flipping coins would be an acceptable method for selecting the team, as would “hand picking” the team. The only stipulation is that the team must be defined before the competition.

Questions comments & impassioned speeches to Bud Houston Houston.Bud@gmail.com. Visit the web store at: www.dogagility.org/newstore. Please note that the web store carries The Book of Agility Games. This is an important reference for any club who plays the variety of games that we’ll play in Top Dog Agility Players.